Mr A and I had a 200 birthday bonus point coupon for Lawry’s burning a hole in our pocket, and Five Crowns had an opening at 5:30pm. Five Crowns looks similar to its sister property Tam O’Shanter in Burbank, an old fashioned ivy covered Tudor cottage that is more of a neighborhood joint with fantastic prime rib and a yearly rockin’ St Patricks Day party. Highly recommended.  But the 5 Crown’s locale in Newport Beach means it’s traditionally been a haunt for the ultra rich and ultra old.  But in an attempt to keep up with times and stay relevant, they’ve converted their bar into the Sidedoor bar, a casual and intimate spot with roaring fires and great food. It seems to be working, because that place was PACKED tonight. But we wanted prime rib so we headed to the dining room.
OpenTable now says the dining room dress code is casual! Can you believe it! One of the fanciest restaurants in the OC! At least back in the 80’s. But there was no sign of lowered standards tonight. The old money set was out in force and a wedding reception was on the patio. I especially enjoyed watching the old lady at the next table order a coke and receive an old fashioned glass bottle of Mexican coke and a glass full of ice. Sometimes they treat us a bit like little kids sitting at the grownups table, and they’re always surprised when we pull out the coupons and Lawry’s VIP card, which by the way is a great deal. You get a $25 gift certificate every $250, and you get a 200 point bonus every year on your anniversary.  So every 2 or 3 visits you’re using coupons.
We go to the Lawry’s family of restaurants for their outstanding prime rib, Yorkshire pudding, creamed corn, and creamed spinach. The classics never go out of style. 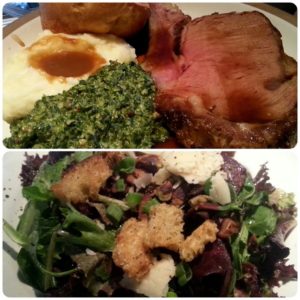 Great wine list at this place as well. Tonight we tried the Mondavi Reserve Cab and Stag’s Leap Artemis Cab. The Artemis was really yummy. Should be, it was $17. But we’re worth it.
However, Lawry’s desserts weren’t good enough for us, so we trotted over to Fashion Island Newport Beach to pick up some cheesecake at Cheesecake Factory. If ever there was a shrine to materialism, it would be this mall. Vast sweeping lawns and grounds. Impeccably clean parking garages. Each store is about twice the square footage of a normal mall store. And this Material Girl noticed that just about every woman was carrying a Louis Vuitton handbag. Dad reminded me that if I ever travel to South Korea, which may very well happen, I can pick up a knockoff LV there. Good idea, because I won’t be buying a $1000 LV bag anytime soon.
Unless we could stop going to Lawry’s for about 2 years. Nah…